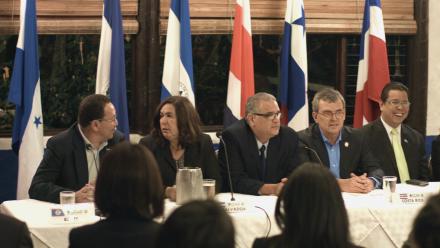 To this end, UN CC:Learn  has compiled and analysed the most relevant climate change learning initiatives developed by SICA countries, identifying national strengths and experiences to share as well as information gaps and other common challenges. The challenges have been discussed and addressed by the eight countries in a joint Action Plan, which is expected to accelerate regional climate change education, awareness raising and civil participation actions between 2017 and 2022.

The elaboration of a video on the vulnerability of Central America to climate change is one of the first activities of the joint Action Plan and is already underway. In San José, the Ministers and other representatives of the SICA countries, contributed to the video by sharing how they see that climate change education and awareness raising can help building resilient communities.

The Ministers also showed their interest and support to the next activities of UN CC:Learn, including a webinar and a workshop on funding mechanisms for climate change learning activities, which will take place in March and April 2017.  These activities will help the SICA countries identify funding opportunities for the next phase of UN CC:Learn project in the region.

Teaching climate change as a geography teacher in Jamaica

The UN CC:e-Learn Courses are Indispensable for Climate Change Awareness