Mariel Bueno, a trained Agroindustrial Engineer from Cochabamba, Bolivia, is a motivated youth that never stops learning. She started questioning herself, her work and her contribution to the world and after taking a UN CC:Learn course, she discovered a new truly fulfilling career path. 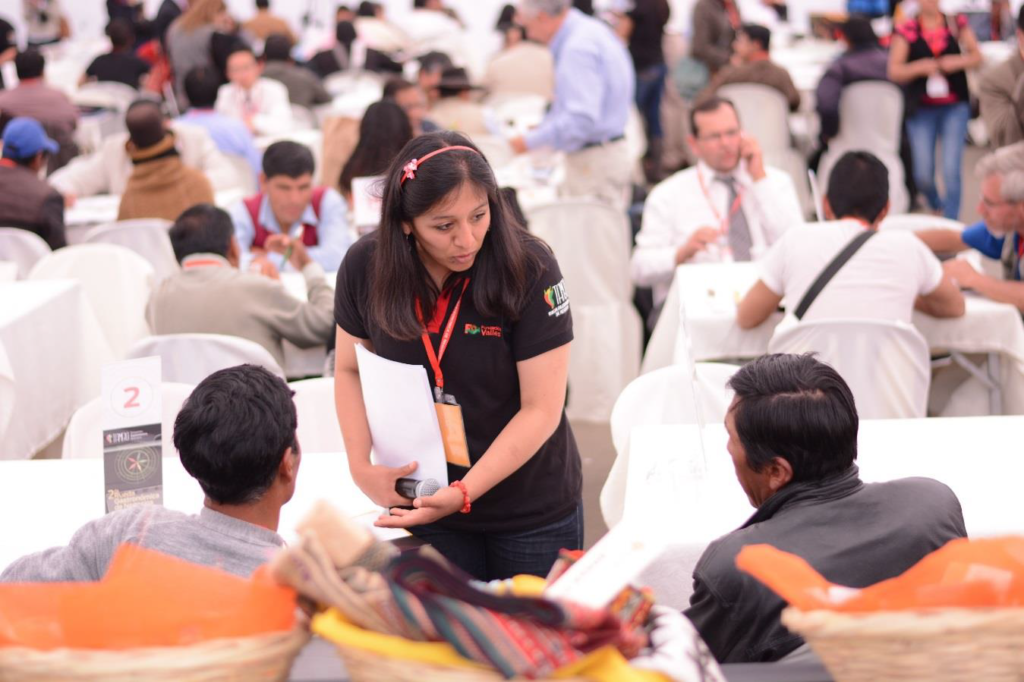 Mariel interacting with the participants of the Second Gastronomic Business Round. Here she is advising two producers. /©Wilder Córdova.

Mariel graduated from Agroindustrial Engineering with excellence. Equipped with a door-opening diploma, she began her career in agribusiness. She gained firsthand experience and technical skills in logistics, agro-productive chains, and supply and demand of agri-food products. She had the opportunity to interact with many of the key industry stakeholders, producers from different regions, executives, and entrepreneurs in the agri-food sector.

And yet, despite her quick progress up the career ladder, she soon started questioning herself, her work and her contribution to the world.

From an early age, I immersed myself in two realities of which I learned a lot: the countryside and the city, the production of food and the food industry, small farmers, peasants and merchants, scarcity and abundance. This is how I grew up, appreciating each world with its differences.” 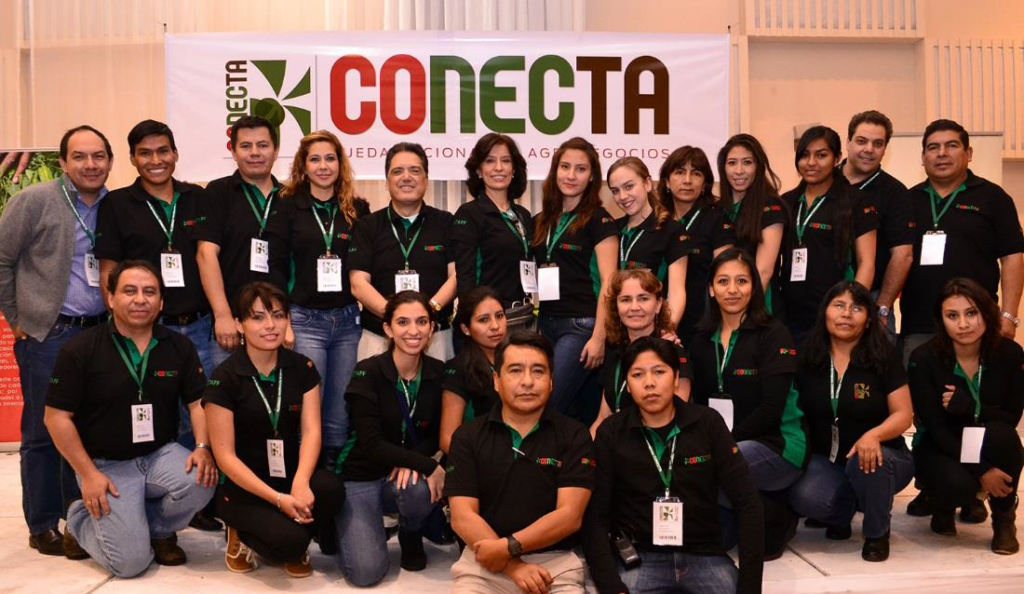 The team at the end of the Sixth National Agribusiness Wheel “Conecta”. /©Fundación Valles

Mariel’s childhood memories drew her back to the countryside, where she ventured into the world of dairy products with a private company. But even there she could not find an answer and fulfillment. Feeling lost again, she was determined to search and learn.

Despite everything I was living, I decided to continue learning. I firmly believe that we always have to go ahead and make our existence worthwhile. I took several courses online and the light finally came through the NAP-Ag MOOC.” 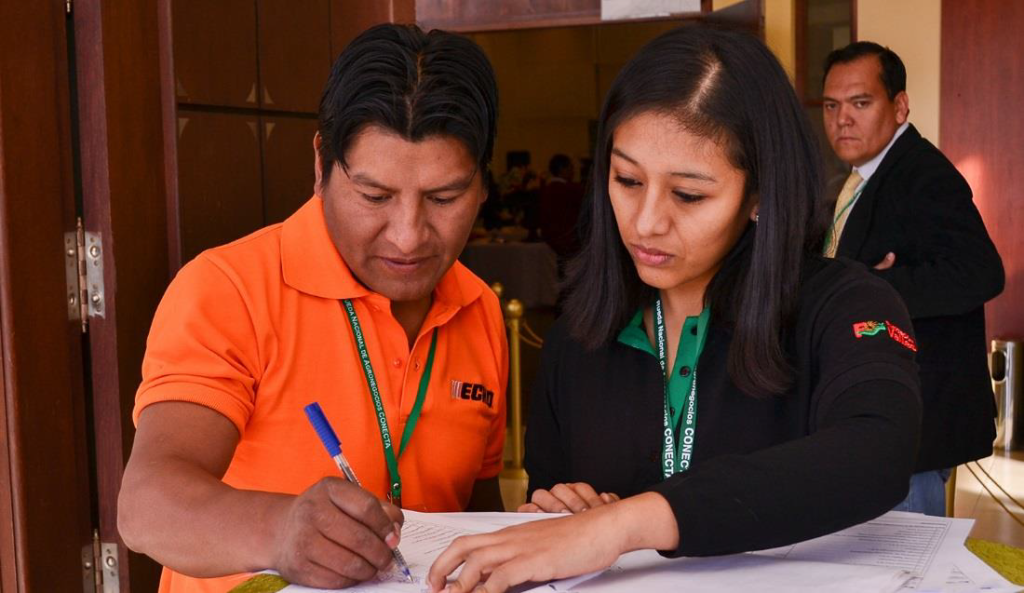 This is how Mariel discovered the Massive Open Online Course on National Adaptation Plans: Building Climate Resilience in Agriculture (NAP-Ag MOOC) on UN CC:e-Learn platform. Throughout the course, she learned about adaptation planning, food security and she focused on her own country for the peer assessment project. Bolivia is experiencing its worst water crisis in the last 25 years and is vulnerable to droughts and pollution of rivers. Mariel chose the province of Capinota, previously known for its vast potential for productive diversity, which was recently declared as “Zone of Natural Disaster.”

“At the beginning, it seems that it [the MOOC] will give you some great new ideas about climate change, the importance of adaptation plans, and agriculture for food security. However, in the end, beyond increasing your awareness and knowledge about these issues, it opens your mind and a little bit, your heart.” 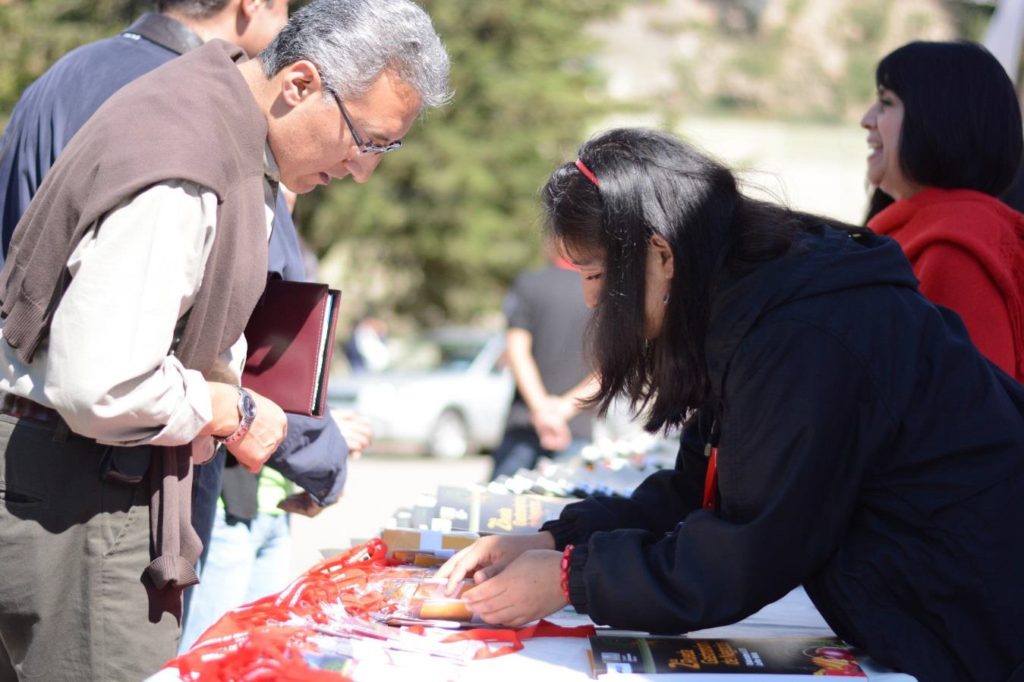 Mariel at the Second Gastronomic Business Round. /©Wilder Córdova.

Mariel learned a lot from the course. But beyond that, she actively transformed the theory into her new reality. By taking the NAP-Ag MOOC, it became clear to her that she would like to support her community in adapting to severe changes in the climate, help farmers develop new skills and use better technologies and advocate for policies that strengthen the productive sector.

This course allowed me to find my way, to define what I want to do the rest of my days. I know it is not too late to do something for Capinota, Bolivia or the world. But, I also know that there is still a lot of work to be done,” she says after taking the NAP-Ag MOOC.

Currently, Mariel and her mother work at their own urban garden Huerto Urbano Agroecológico “LaVictoria.” They produce their own food, and most of the vegetables and spices that their family consumes, such as tomatoes, oregano, celery, parsley, peppermint, pumpkin, etc, come directly from their garden. The mom-daughter duo also started the production of seedlings (eco-gardening, nursery), which they sell at local fairs. They are also planning to open an agro-ecological store at their house to sell local farmers to produce and promote agro-ecological farming, organic products and local consumption. 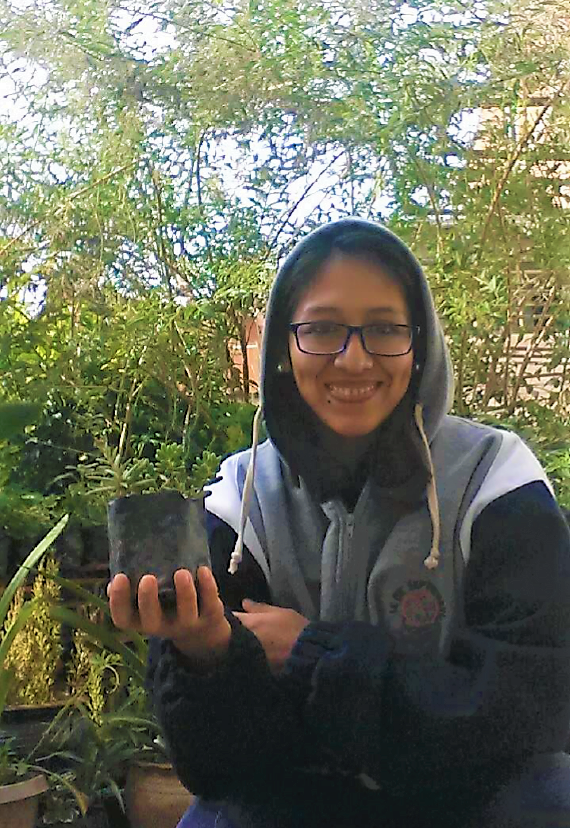 A plant that Mariel and her mother grow in their urban garden. /©Mariel Bueno

Mariel is also a full-time graduate student. She earned a half fee scholarship for a graduate program called, “Master of Science in Geoinformation and Earth Observation,” in part, due to her innate passion for learning. Above all, she has her mindset to cooperate in the sustainable development of her surroundings.

Mariel calls for more involvement of national institutions to provide agricultural education programs, which could provide education to farmers to support the development of technical capacities, gender analysis, and sustainable agricultural food cooperatives.

You can support Mariel and her projects! Visit: