Professor Sanoussi Atta from Niger and Elise Kaba from Burkina Faso work together to prepare and to equip professionals with the knowledge and skills required to contribute to a better future in the Sahel. Both received training on ‘How to Develop, Deliver, and Evaluate Effective e-Learning’ to strengthen its learning system at Aghrymet.

Have you ever thought about how powerful teams come together? What are the odds that  two talented individuals from different places and different backgrounds cross paths and start working on the same issues? Professor Sanoussi Atta grew up in Niger. After studying Agricultural Engineering, he became a doctor in Biological Sciences. Elise Kaba is from Burkina Faso. She pursued her studies in Computer Science and worked her way towards a master’s degree in Physics. For the greater part of their lives, Elisa and Sanoussi walked different paths. Little did they know that something bigger than themselves would connect them, something that for years it was just a shared notion of space but that later would become the focus of their careers: the Sahel.

Located in West Africa, just below the Sahara Desert, this region of arid land that stretches from Senegal to Chad is a cultural and historical shoreline between the Middle East and sub-Saharan Africa. Since antiquity it has been the arena of interaction between Arabic, Islamic and nomadic cultures from the north, and indigenous and traditional cultures from the south. For these reasons, the Sahel has a powerful but also uneasy atmosphere. Over the decades, this has been a place of growing ethno-religious tensions, political instability, and poverty, aggravated by the inherited hardships of such dry environments. To make matters even more concerning, the region is particularly vulnerable to climate change. While the prospects are of increased temperatures globally, in the Sahel temperatures are rising 1.5 times faster than the global average, meaning that in the coming decades the region will most likely be defined by extreme weather occurrences. Addressing such impacts and adapting to the changes are of critical importance of the Sahel and this is where Prof. Sanoussi and Elise Kaba’s paths have crossed.

Prof. Sanoussi is Head of the Training and Research Department at the AGRHYMET Regional Centre (CRA*), a specialized institution of the Permanent Inter-State Committee for Drought Control in the Sahel (CILSS*) located in Niamey, Niger.  His department is dedicated to the development and delivery of training and information on food and nutritional security, water management, climate change and the fight against desertification. Elise oversees the centre’s distance learning platform. Both are expert trainers working to prepare end equip professionals with the knowledge and skills required to contribute to a better future in the Sahel. But to do so at scale, the duo realized it was necessary to strengthen its learning system. “We knew it would be useful to move towards online courses and make the best of current technologies to increase our reach, training the greatest number of people possible in our countries and also to reduce costs”, Prof. Sanoussi and Elise explain. What they needed was a little technical guidance, which they got through the One UN Climate Change Learning Partnership (UN CC:Learn).

Through its West African Hub, UN CC:Learn delivered a Training of Trainers (ToT) to the AGRHYMET team on “How to Develop, Deliver and Evaluate Effective e-Learning”. The training was specifically tailored to AGRHYMET’s needs, supporting them in creating e-learning modules for their face-to-face master’s degree on climate change. “During the workshop, we learned the principles and methods for creating online courses and we had the chance to experiment, by applying the different steps in the process of developing an effective e-learning pilot product”, they recall, adding that the group exercises also allowed them to practice on existing course modules delivered at the Centre. 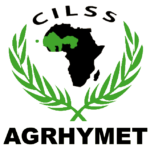 After the training, the team lost little time in putting what they had learned into practice with their main course module: Integrating Climate Change Policies. “This course was originally delivered in a face-to-face setting and the material was all in PowerPoint format. So, we used what we learned during the workshop to transform it into an e-learning course”, said the dynamic duo, with some pride. Now, Prof. Sanoussi and Elise are prepared to share what they have learned. “We have mastered the development of e-learning courses and we are committed to support and train our colleagues to do the same” they said, with some confidence that this episode will leave a meaningful legacy at AGRHYMET. “We are driven to provide high-quality adult education and develop the centre’s diploma training courses for distance learning, reaching a larger number of participants in the CILSS countries and Economic Community of West African States (ECOWAS)”.

UN CC:Learn is excited to see what new upcoming learning solutions will be developed by these two climate champions and their teams.

Spreading the Word on Climate Change Education in Rural Liberia

What can a Millennial do to Tackle Climate Change?