The National Council on Climate Change of the Government of Indonesia held a workshop with over 62 participants representing 15 government ministries and agencies, 7 UN agencies, the UN Resident Coordinator Office, 3 universities, NGOs and the private sector, to review progress on development of a National Learning Strategy to address climate change.

The National Council on Climate Change (DNPI) of the Government of Indonesia held a workshop on 14 February 2013 with over 62 participants representing 15 government ministries and agencies, 7 UN agencies (UNESCO, FAO, ILO, WHO, UNORCID, UNEP, UNITAR), the UN Resident Coordinator (RC) Office, 3 universities (University of Indonesia, University of Sriwijaya, Bandung Institute of Technology), NGOs and the private sector, to review progress on development of a National Learning Strategy to address climate change. Participants reached a common understanding of the objectives of the Strategy and its priorities. The Strategy development process is supported by UN CC:Learn, a One UN initiative in the area of climate change learning. 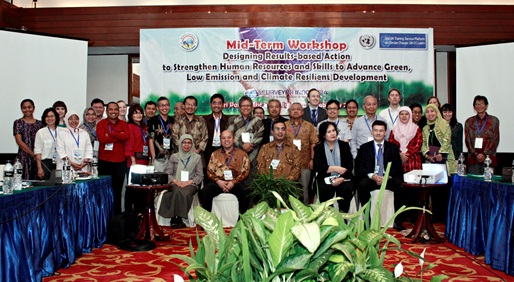 The meeting was opened by Mr. Agus Purnomo, the Head of the DNPI Secretariat and Special Adviser to the President of Indonesia on Climate Change. Mr. Purnomo pointed out that climate change awareness should be at the heart of the political debate to help the young generation prepare themselves better to face negative impacts of climate change. Other speakers included Prof. Shahbaz Khan, Chair of the UN Working Group on Climate Change, Mr. Angus Mackay, the Head of UNITAR’s Climate Change Programme and Mr. Doddy Sukadri, the National Coordinator for UN CC:Learn in Indonesia. 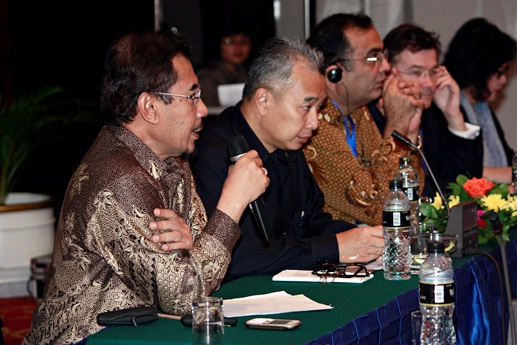 Strategic learning priorities for climate change were agreed by participants as well as a list of follow up actions for immediate implementation. These range from the provision of basic training for community leaders on REDD+ to capacity building for managers within the energy industry, and public awareness campaigns on climate change mitigation and adaptation. Participants also discussed the importance of integrating climate change learning into the national curriculum, in view of the fact that Indonesia is launching a new curriculum for primary and secondary schools during 2013.

The National Council on Climate Change was confirmed in its role as the coordinating agency responsible for implementation of the Strategy, working closely with and through key ministries and academic institutions. UN agencies voiced their support for the learning Strategy, proposed a range of joint activities and held a follow-up meeting to discuss strengthened engagement.

The Strategy will be finalized in April 2013 and launched in May 2013, together with three immediate learning projects to be funded under the UN CC:Learn Initiative.

The report of the workshop is available here.