Addressing the adverseeffects of climate change in Benin, such as floods, droughts, heat-waves and sea-level rise, requires new competences and skills in various sectors, and at different levels of governance. To address this challenge, Benin kicked off the UN CC:Learn pilot project entitled “Strengthening Human Resources and Skills to Address Climate Change” on 10 November 2011, through a National Planning Workshop in Cotonou. Close to 40 representatives from various government sectors, national education and training institutions, civil society and the UN system participated in the workshop. 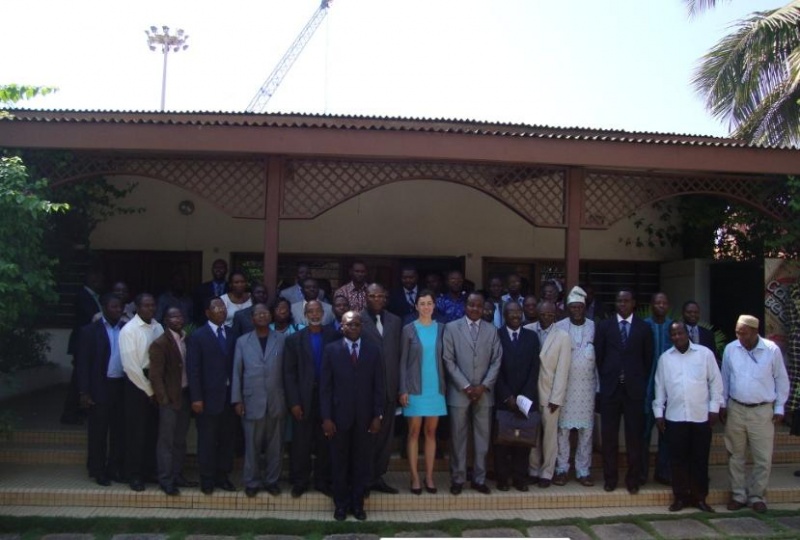 The Workshop was opened by Mr. Blaise Ahanhanzo-Glèlè, Minister of Environment, Housing and Urbanism. The Minister highlighted the importance of learning, training and awareness-raising to address climate change and recognized the engagement of national learning institutions in the project. Mr. Ambaliou Sanni, Director General of Higher Education and President of the Scientific and Technical Committee of the UN CC:Learn project in Benin expressed his hope that the project can generate lessons learned that are also relevant for other countries.

The main objectives of the National Planning Workshop included to develop a common understanding of the UN CC:Learn project; take stock of relevant national and international initiatives; identify key actors; and agree on a Terms of Reference and work plan for developing a National Strategy to Strengthen Human Resources and Skills to Advance Green, Low Emission and Climate Resilient Development.

The workshop commenced with a presentation on UN CC:Learn by Ms. Amrei Horstbrink, UN CC:Learn Secretariat which is hosted by the United Nations Institute for Training and Research (UNITAR). The presentation was followed by an introduction to the work plan for Phase 1 of the project in Benin by Mr. Médard Ouinakonhan, General Environment Directorate, Ministry of the Environment, and the review of a Background Report on National Climate Change Priorities and Objectives and Relevant Capacity Development Initiatives by Mr. Nestor Aho, Professor at the University of Abomey-Calavi, Faculty of Agronomic Sciences. The report had been jointly prepared by a team of university professors and government officials and participants provided fruitful comments to complement the information included in the report.

The workshop also discussed the proposed methodology and Terms of Reference for the developing the National Strategy. Mr. Ambaliou Sanni, moderator of the workshop, recognized the structured and results-oriented approach of the methodology.

Reflecting on the day, Ms. Amrei Horstbrink, congratulated organizers and participants to a successful Planning Workshop that clearly revealed the commitment of government and stakeholders in taking a strategic approach to climate change learning and skills development. Mr. Ibila Djibril, National UNFCCC Focal Point and Coordinator of the UN CC:Learn Project in Benin, in closing the workshop highlighted the excellent collaboration between government agencies, learning institutions, stakeholders and the UN system in initiating the project.

UN CC:Learn, is a collaboration of 30 UN agencies with the aim to strengthen human resources, learning and skills development in Member States through country driven processes. It is included in the “One UN Climate Change Action Framework” of the UN System Chief Executives Board for Coordination (CEB) through the High Level Committee on Programmes (HLCP).

UN CC:Learn pilot projects aim at supporting five countries,  Benin, the Dominican Republic, Indonesia, Malawi and Uganda in taking a strategic and long-term approach to climate change learning with the ultimate goal to mainstream climate change learning within existing learning system. They are directly linked to, and make a contribution to the implementation of Article 6 of the UN Framework Convention on Climate Change (UNFCCC) and the UNFCCC Capacity Development Framework. They also apply the core principles of the Paris Declaration on Aid Effectiveness which emphasize country ownership, empowerment of national institutions, and alignment of support by development partners. The pilot implementation phase of UN CC:Learn in 2011-2013 is supported by the Swiss Development Cooperation (SDC).