At a high-level event with over 60 participants Uganda’s Minister of Water and Environment, H.E. Prof. Ephraim Kamuntu launched the National Strategy to Strengthen Human Resources and Skills to Advance Green Low Emission and Climate Resilient Development 2013-2022 on 28 June 2013, Kampala, Uganda.

At a high-level event with over 60 participants Uganda’s Minister of Water and Environment, H.E. Prof. Ephraim Kamuntu launched the National Strategy to Strengthen Human Resources and Skills to Advance Green Low Emission and Climate Resilient Development 2013-2022 on 28 June 2013, Kampala, Uganda. In his remarks the Minister highlighted that the National Strategy was a decisive step for Uganda to strengthen its national learning system to make sure people, especially the young generation, had the right knowledge and skills to build a climate-smart future.

The most important variable that determines whether Uganda is able to address the challenge of climate change and achieve sustainable development is human capacity,” Prof Kamuntu said.

The Minister further thanked the Swiss Government, UN CC:Learn Partners and the UN Organisations in Uganda for their support to the development of the Strategy. 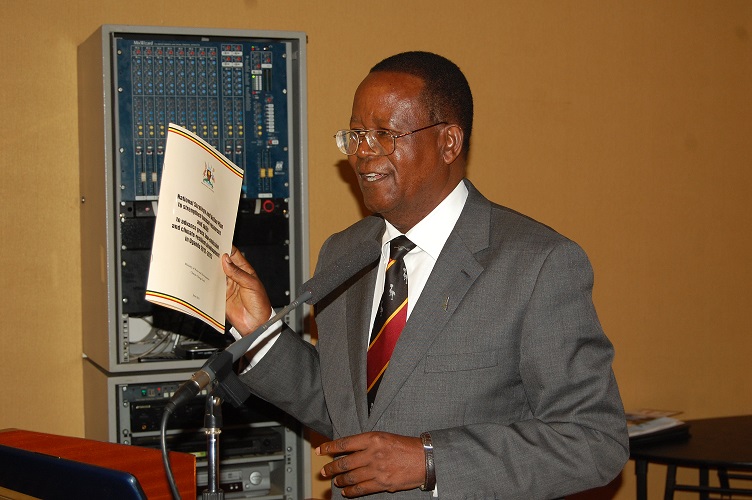 The event was attended by several senior guests including the Deputy Chair of the National Planning Authority (NPA), H.E. Dr. Abel Rwendeire; the Coordinator of the Climate Change Unit (CCU) and National UNFCCC Focal Point, Mr. Paul Isabirye; the representative of the Permanent Secretary, Ministry of Water and Environment (MWE), Ms. Rachel Musoke; and Members of Parliament. The Minister of Education and Sports, H.E. Ms. Jessica Alupo, whose Ministry through the National Curriculum Development Center (NCDC) played a key role in developing the Strategy, had also planned to attend the launch event. 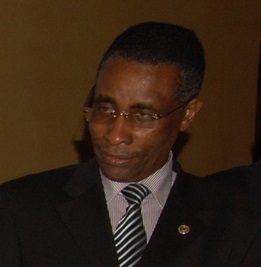 H.E. Abel Rwendeire, Deputy Chair, NPA, pointed out that the Strategy was directly linked to the National Development Plan of Uganda which identifies climate change as a key issue for Uganda’s development.

The UN in Uganda was represented by the Deputy Country Director of the UN Development Programme (UNDP) in Uganda, Mr. Safiou Esso Ouro-Doni. Mr. Ouro-Doni congratulated the Government of Uganda to the launch of the Strategy and underlined that the UN in Uganda was looking forward to supporting its roll out. The global UN CC:Learn partnership was represented by Ms. Amrei Horstbrink, UN Institute for Training and Research (UNITAR) who highlighted that Uganda was the second UN CC:Learn pilot country to launch its National Strategy. 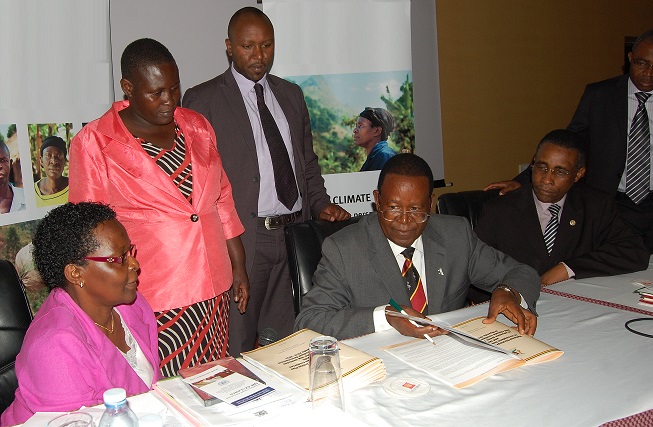 The Minister signing the Strategy. On the left: Rachel Musoke, representing the Permanent Secretary, MWE, and Members of the Parliamentarian Forum on Climate Change. On the right: H.E. Abel Rwendeire, Deputy Chair of the NPA, and Safiou Esso Ouro-Doni, UNDP Deputy Country Director. 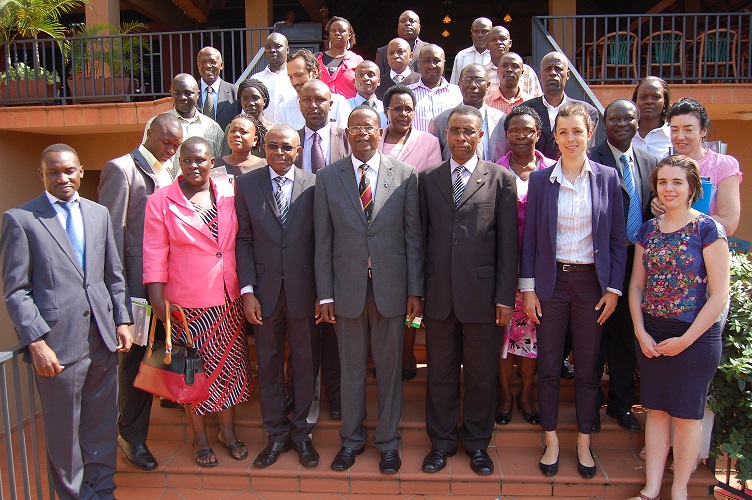 Group photo with some of the 60 launch event participants.

Some of the recommended actions outlined in the Strategy have already been initiated. The National Curriculum Development Center is partnering with the Climate Change Unit and the UN Children Fund (UNICEF) to develop and pilot-test resource materials on climate change for upper primary education building on important work supported by the Danish Government. Moreover, the Climate Change Unit is working with the Least Developed Country Environment Center (LEC) and Makerere University on a training programme for Climate Change Desk Officers across various Ministries.