In front of a packed auditorium at the Kartika Chandra Hotel in Central Jakarta, the President of Indonesia’s Special Envoy on Climate Change, Dr. Rachmat Witoelar, launched the National Climate Change Learning Strategy. The event is part of the national UN CC: Learn pilot project. .

29 August 2013, Jakarta, Indonesia. In front of a packed auditorium at the Kartika Chandra Hotel in Central Jakarta, the President of Indonesia’s Special Envoy on Climate Change, Dr Rachmat Witoelar, launched the National Climate Change Learning Strategy. “Climate change is everyone’s business” stated Dr Witoelar in his opening remarks, going on to stress the importance of cross ministerial coordination in fulfilling the objectives of the strategy. Dr Witoelar thanked the Swiss Government for its support acknowledging also the UN CC:Learn partnership as well as the hard work put in by his own staff at the National Council on Climate Change. The event is part of the national UN CC: Learn pilot project. 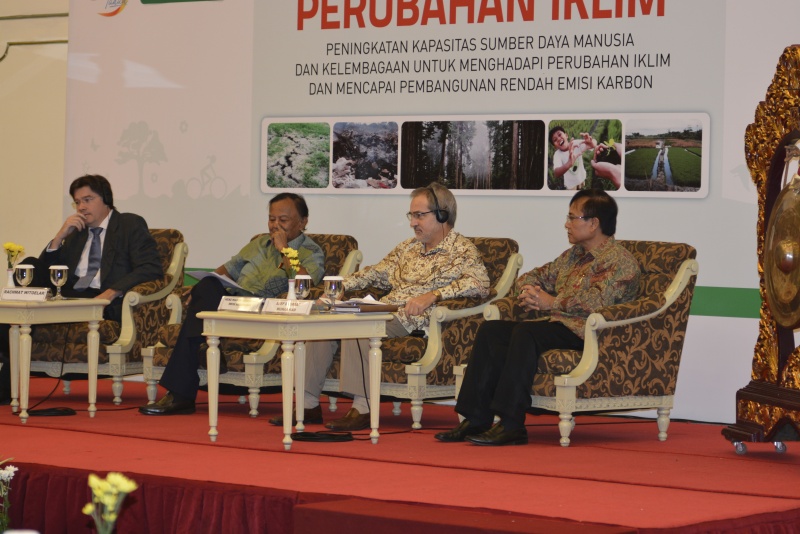 Dr Witoelar was joined on the platform by his Excellency Mr Heinz Walker-Nederkoorn, the Ambassador of Switzerland to Indonesia, Mr Asep Djembar Muhammad of the Coordinating Ministry of People’s Welfare, Ms Maria Andrea Melo Cruz of UNESCO and UN Climate Change Working Group for Indonesia, and Mr Angus Mackay, Climate Change Programme Manager at UNITAR and representative of the UN CC:Learn Partnership. The event was hosted and coordinated by the UN CC:Learn national focal point, Dr Doddy Sukadri.

Ambassador Walker-Nederkoorn reflected on the fundamental importance of education as means of achieving climate change objectives, underlining the importance of changing mindsets. He congratulated the National Council on Climate Change for its work as well as the support provided by the UN system in Indonesia. Mr Asep Muhammad called on all Ministries to strengthen their skills and capacities on climate change according to their stated Ministerial mandates and functions, reminding participants of the risks that dangerous global warming hold for prosperity and human welfare.

Ms Andrea Melo delivered a message on behalf of Professor Shahbaz Khan, Chair of the One UN Working Group on Climate Change in Indonesia, in which she linked climate change learning to the wider development objectives of the country, including the importance of making the transition towards a green economy. Mr Mackay stated “Climate change learning is an insurance policy for the future” noting in particular the engagement of the Ministry of Education in the development of the national learning strategy and highlighting several early implementation activities already underway on REDD+ and knowledge management. 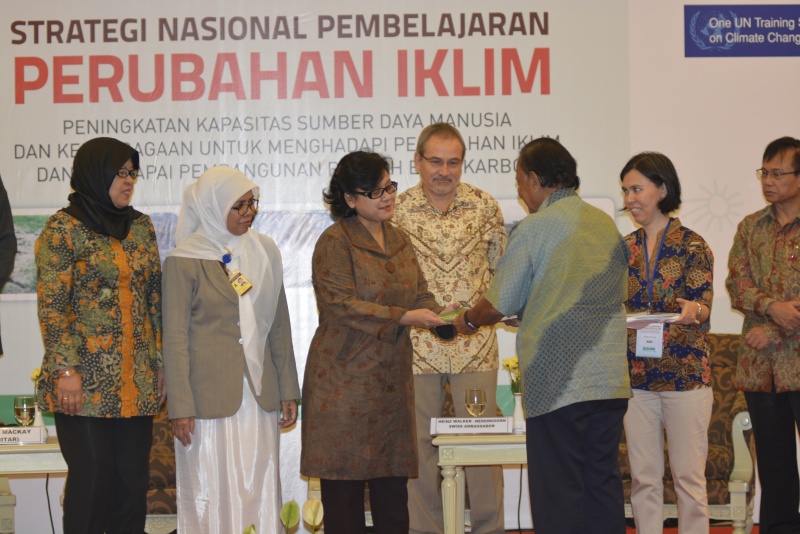 In a formal ceremony of transfer of the national learning strategy representatives from the Ministry of Planning, Forestry, Agriculture, Mining and Energy and Cabinet Office were handed copies personally by Dr Witoelar and the other speakers. More than 20 government sectors were represented at the launch including the Ministries of Finance, of Foreign Affairs and of Environment. Seven UN agencies attended as well as key donors including the United Kingdom, Germany and Switzerland. The national Press was represented by the Jakarta Post and the Indonesia News Agency, Antara News.